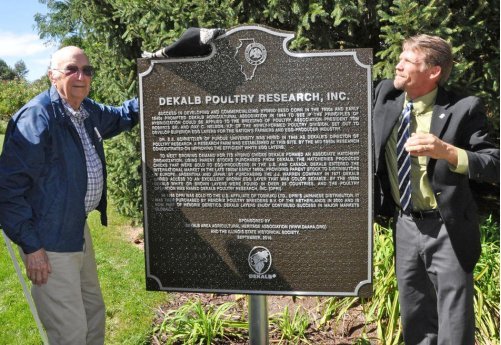 This marker demonstrates our foundation in pioneering thought and ingenuity in the agricultural field.

The Dekalb Area Agricultural Heritage Association has dedicated a state of Illinois historical marker recognizing the site of the original Dekalb Poultry research farm established in 1944.

In 1944, the idea of hybridizing egg laying chickens was still in its infancy. Dekalb Agricultural Association initiated a research program. Their goal was to see if the genetic principles that Dekalb had successfully applied to corn could be applied to egg-laying chickens to benefit the nation’s egg producers. At that time, the average production per hen was about 150 eggs per year.

Today, more than 70 years later, the Dekalb brand of hybrid egg layers enjoys continued success in major egg producing markets. Over this period, average production of a Dekalb hen has increased to more than 300 eggs per year.

Hendrix-ISA US, a division of Hendrix Genetics, serves the US market with parent stock and commercial layers, including the Dekalb brand.